Deprecated: Methods with the same name as their class will not be constructors in a future version of PHP; TSQL has a deprecated constructor in /home/teamardent/public_html/controller/lib/db.php on line 5
 Ardent Management | Hudson County's Premier Property Management Company 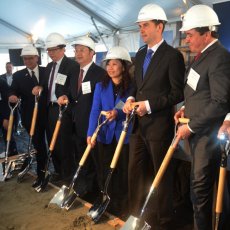 A 79-story Jersey City condo building that will be New Jersey’s tallest structure was officially started Thursday, in the latest example of a building boom that has changed the face of the Hudson River waterfront.

The building, called 99 Hudson for its address a block from the river, is being constructed by China Overseas America of New York City, an affiliate of the Beijing-based China State Construction Engineering.

The building is expected to be done in 2019, at a cost of close to $700 million, according to Cindy Xiu, president of China Overseas America. It will include 781 condos.

At 900 feet, the structure will be taller than the current tallest building in the state, the nearby Goldman Sachs building at 30 Hudson St. in Jersey City, which is 781 feet tall.

While multifamily construction has led the recovery of homebuilding in the Garden State, most of the units built in recent years have been apartments, rather than condos. That reflects a growing demand for rentals as households found it more difficult to qualify for mortgages, or simply held off on buying after seeing values plunge during the house crash.

But China Overseas believes there will be growing demand for condos, especially from buyers who want to be near New York City but at a lower cost. The price range for the units at 99 Hudson has not been set, but in Manhattan, new-construction condos sold for a median price of more than $2 million in the fourth quarter of 2015, according to the Douglas Elliman Report, which tracks New York City real estate.

At Thursday’s official groundbreaking, Jersey City Mayor Steven Fulop welcomed the development, saying that the condo buyers will be “putting down roots and staying for some time.” He said he worked with the builder for two years on the project, but that no tax incentives were involved. Jersey City is in the midst of a building boom, with the highest number of homebuilding permits of any municipality in New Jersey last year. Through November, the city had approved 2,595 homebuilding permits — or more than 9 percent of the statewide total of 28,114, according to the state Department of Labor and Workforce Development.

Fulop said there are currently almost 7,000 housing units under construction in the city, on top of close to 8,000 that have been completed since he took office in 2013. He said Jersey City will soon become the largest city in New Jersey, passing Newark.

The building is the first major Chinese-backed development in Jersey City, according to Fulop. However, China Construction America, which is based in Jersey City and is a sister company of China Overseas America, has multimillion-dollar contracts to rebuild parts of the 83-year-old Pulaski Skyway.

The builder bought the property, now a parking lot, in 2013 from Hartz Mountain Industries of Secaucus for about $70 million. Hartz, in turn, had bought the land from Bank of America for $35 million in 2011. Bank of America’s Merrill Lynch unit has a large building next door, at 101 Hudson St.

Call us, email us, or contact us on social media.